During my years at University, I created numerous blogs and websites for several modules, all of which are no longer updated and were solely for module purposes only. All websites (unless stated otherwise) were created in a matter of hours, ranging from three to six hours or various other periods of short time, and hence earned myself a many individual citations – a few examples are listed below:

During one of the latter modules at City University London, I was appointed Interactive editor by the producer of my group’s Question Time. I created the City Question Time (3) logo, and website on WordPress in a matter of a few hours, and incorporated various social media, photography, video and audio. Our programme was voted best of the day, and the website I created was labelled as “an excellent website to support the show, with a bright attractive design and consistent branding.” and hence earned me two individual citations and an overall Distinction for the module of TV/Studio Programme Making during my Master of Arts. 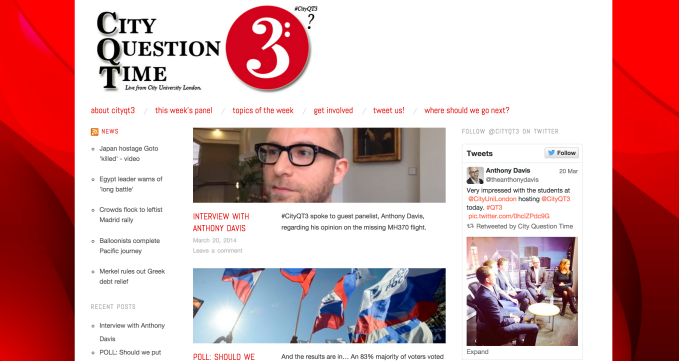 For my Online Journalism module at City University London, myself and a fellow student created a website for an underreported online community throughout the entire academic year, which we chose to be those who love Allotments. During our time curating information for Allotment Lovers and the website we created from scratch, we completed live blogs out on scene, info-graphics, several video packages, audio interviews, phone interviews, guest columns, varied use of social media which we managed by ourselves, a responsive business email address and extensive use of photography and written material, thus learning all practical skills associated with convergent and multimedia production.

For our assessed Television Newsday, I chose to be Interactive editor alongside a fellow student who was digital director. I primarily focused on the design, function and written content on the site whilst my fellow student focused on the audio, video, photography and digital aspects. I created the Purple City News logo from scratch, and organised the various tabs, the RSS feed, Twitter and Facebook. Myself and my colleagues work designing the website in a matter of a couple of hours maximum earned us both two individual citations each and took us both over the grade threshold to another Distinction, with the marker stating “the digital content was particularly impressive, with fly on the wall stills taken during the preparation period, Facebook and the website all contributing to an excellent overall online experience.”

I volunteered to be Interactive Editor during our assessed Radio news day, and yet again, I created the simplistic blog and curation of news within a matter of a couple of hours. Having encountered a family emergency the day before, I did not have enough time as I would have liked to complete my work, I created the LPR FM logo on the train (A mock up of LBC Radio), and I added additional content through out radio show, including a live twitter feed. Our radio show and website earned us a Distinction with the marker stating (about the site) “The digital output was impressive; a well-designed site with a good mix of editorial, photography and social media widgets, the overall skin and design also worked well for the target audience. “ 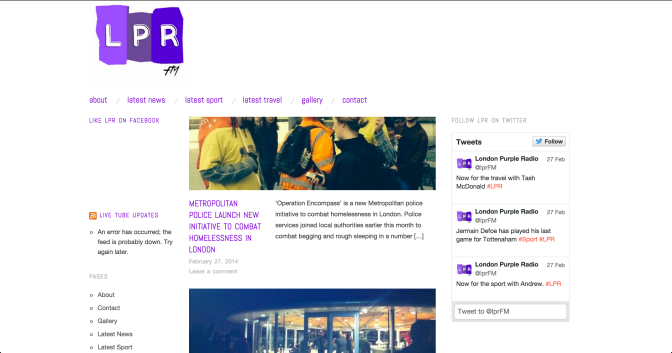 During my Bachelors of Arts degree at Staffordshire University, I was asked to create my own personal blog for the Web Journalism module. Hello, I’m Shehnaz, is a short preview into what was to come in the future, because little did I know that after posting my own thoughts as such, I would one day get paid to write the same, opinionated (and often relentlessly sarcastic) entertainment news pieces for huge sites such as Yahoo! and The Huffington Post. I haven’t posted on the site since early 2012 since it was just a sample, however it serves as a reminder of how far my growth in digital and online journalism has come thus far. I created the banner from scratch entirely on Adobe Photoshop, and also edited the CSS and HTML coding to ensure the tab was removed before publication.

Jay Sean: “My parents were supportive of my music career” JoJo: “I would say ‘Reckless’ is my favourite track to perform from Mad Love”

Eric Bellinger: “The only artist I still need to work with is Jay-Z” Check out my exclusive sit-down interview with @TreySongz!